OPTICAL RESOLUTION AND WHY IT MATTERS
1 January, 2019 by

The fundamental definition of resolution is the ability of an optical system to see fine detail in an object being imaged. However, in reality, resolution is a somewhat broad term as it includes image sharpness and contrast. The resolving power of a scope is the sum total of several components such as optical design, glare, color correction, and focus.

The units commonly used to measure resolution are seconds of angle or 1/3600th of a degree. For example, a rifle scope having a resolution of 1 arc seconds is equivalent to resolving a feature 0.017 inch at 100 yards. But this is only theoretical, since in application, a good quality rifle scope with a large 50 to 60mm objective at high power can realistically resolve down to about 2.5 arc seconds or slightly less than ½ inch at 100 yards.

The clarity or sharpness of the smallest detail seen is never totally resolved, but if the smallest detail can just be distinguished it is considered resolved. How sharp the feature is resolved compared to how much it blurs out in the field in is called MTF (modulation transfer function), which describes how well one can see small details with respect to black and white lines placed closely together. As the lines get closer together it becomes harder to see them as line pairs, and as you approach the resolving limit they are just barely distinguishable as a pair. We can say the limit is if they are 10% resolved. At 10% resolved this can be stated as having an MTF for that pair of 10%. For the human eye with no optical aid, a person with 20/20 vision can distinguish a one minute angle, which would be 1 inch black and white bars at 100 yards. With an optical system with a magnification of 2 power we can see line pairs of ½ inch spacing at 100 yards.

Below is a typical MTF chart showing how line pairs closer together become harder to distinguish. 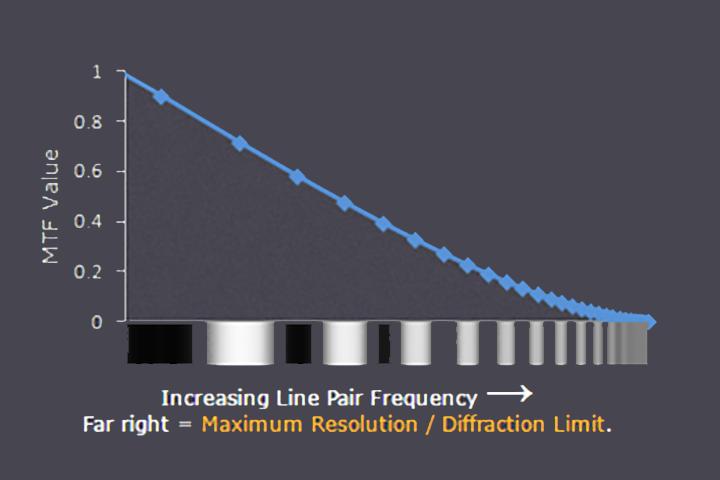 In a rifle scope at low power, the image is so well resolved that it is beyond the human eye to see the potential smallest detail because of the limits of the human eye. As we use scopes of higher magnification the image details become closer to the human eye limit and as we get up to 30 to 60 power the scopes optical system needs to be designed such that it maintains the capability of the eye.

Resolution With Respect To Magnification And Aperture

NOTE: Letters B-G are all the same number because they represent resolution for the respective aperture listed regardless of magnification.

This chart illustrates how larger objectives have potential of providing sharper images. However in the upper powers, the lens design plays a much larger role in providing better resolution. The numbers above are only valid for diffraction limited systems. At 60 power and using an 80mm objective the detail comes very close to that of the human eye but at 2 power a scope with an 80mm aperture is producing an image with detail much smaller than can be appreciated by the human eye.

Resolution in a scope is a combination of how magnification and objective lens diameter allow the eye to see small details better than using the unaided eye. Larger lenses have the potential of providing smaller details but depending on magnification there is an optimum objective lens diameter to see small details better than the unaided eye. To put it simply, a scope needs to be designed in a way that it AIDS your eye in seeing resolution at magnification, but there is a point where resolution can exceed the capabilities of the human eye. By designing a system that meets, but does not excessively exceed the capabilities of the human eye, we can offer an optic with the perfect balance of optical quality and cost efficiency.