My Grandpa is an incredible hunter and an amazing shot. He hunted for many years with a 300 Win Mag so I thought I would get his opinion on this classic caliber. When I asked him what should be said about the 300 Win Mag he said without hesitation, “It kicks like a mule.” Although this is true, he and many others would not have used it for so long if it did not have so many desirable qualities as well. Over the years since its conception in 1963 it has become a staple not only in the hunting world, but also in target shooting and military use as well. In the context of long range shooting, the 300 Win Mag is often the standard that we measure all other cartridges against. The big question, though, is if it is the best long range hunting cartridge or not.

30 caliber bullets as we know them have been around for over a century and have been used in standard military rounds until just recently. These military rounds included the 30-06 springfield and the 308 Winchester. These calibers are not particularly impressive in their trajectory and during the early through mid 1900s there was a lot of experimentation being done to develop a 30 cal cartridge with excellent ballistic performance.

Some of the 30 cal rounds developed during this time include the .300 H&H Magnum in 1925, and the .300 Weatherby Magnum in 1944. In 1958 Winchester introduced the 338 Win Mag, the 264 Win Mag, and the 458 Win Mag. These cartridges were based off of the 375 H&H magnum brass with less taper in the body to allow for more powder. Finally in 1963 Winchester came out with their 300 version. This cartridges was based off the same brass as the previous 3 but had the shoulder moved farther forward to allow shooters to ream their .308 Normas or .30-338 Winchesters to accept the new 300 Win Mag. This cartridge proved to be what people were looking for and has outgrown all the other 30 calibers that existent at the time.

One of the reasons that this cartridge has been so popular for so long is that it shoots a big bullet fast, allowing for great knockdown power and minimal compensation at standard distances. It’s a favorite of U.S. Military snipers and has seen action in battlefields around the world. When people want to get into long range hunting this is often the first place they go but the question is if it is the best choice? Although this is a fairly popular debate lets compare the 300 Win Mag to the 7mm Rem Mag and look at the actual numbers. 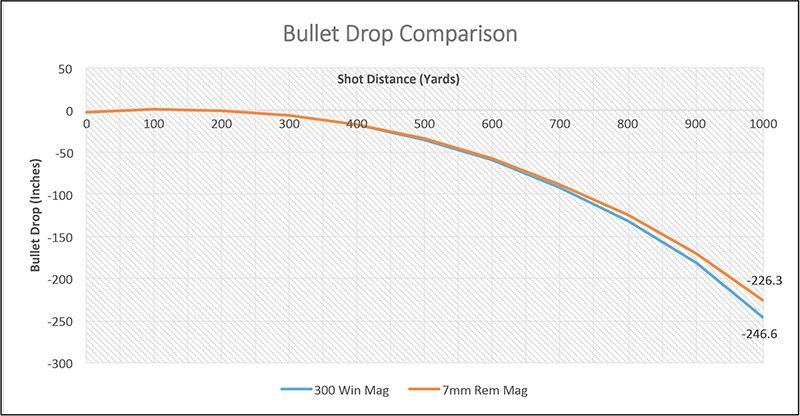 For shooting elk or similar sized critters a 160 to 180 grain bullet is just about ideal. A popular long range load for the 300 Win Mag near this range is the 190 grain Berger VLD. The 7mm counterpart is the 180 grain Berger VLD. In the standard Gunwerks loads these two bullets have identical muzzle velocities. The G7 BC however is quite different between the two bullets. The 180 grain 7mm bullet has a G7 BC of .659 while the 190 grain 30 cal bullet has a G7 BC all the way down at .570 despite it being 10 grains heavier. At 1000 yards this translates to an extra 20 inches of drop and 10 inches more drift in a 10 mph cross wind for the 300 Win Mag. In order to match the BC of the 7mm Rem Mag you have to go up to about a 210 grain bullet and still be pushing the same velocity. This is possible but unless you need the extra knockdown for larger game it is overkill, and, like my grandpa remembered, it will kick the snot out of you.

So the almighty Ballistic Coefficient has spoken and shown that at long ranges the slightly smaller bullets with better BCs will perform slightly better than the big 300s. Does that mean that the 300 Win Mag is a bad choice? I don’t think so. There are a lot of guys that like the 30 cal and if thats what you want or if thats what you have then I say go for it. On the other hand, if you want something that has as good or better performance as the 300 Win Mag with less recoil then you probably ought to look into the 7mm Rem Mag, or Gunwerks own 7 LRM which even outperforms the 7 Rem Mag.