This September I was able to hunt mountain goats with Beaver Foot Outfitters in British Columbia.  It was an exciting hunt—we would spot goats from the valley floor, and climb 3000-4000 feet every day to hunt them.  The benefit was a hot shower and soft bed every night!  I was finally able to connect on a billy at 575 yards, but with a quartering 15 mph wind.  In a trophy hunting situation, it's important to have the equipment and preparation to ensure that you can make the shot at that once-in-a-lifetime trophy, even at 800 yards!  Part of that preparation is understanding, in simple terms, the external ballistics of a typical long range shot.  External ballistics covers everything that happens during a bullet's flight between the muzzle of the rifle, and the target. 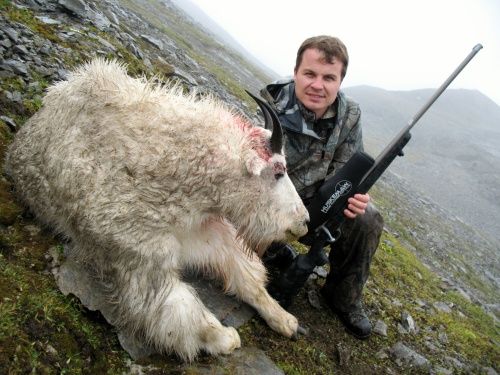 Mountan goat taken by the author at 575 yards with a 15 mile per hour crosswind.  With the Gunwerks Ballistic Turret dial to 575 yards, he held right on.For long range shooting, there are two very evident factors that affect the bullet's flight.  The first, and most obvious is the effect of gravity.  We all understand how gravity works, and with the additional corrections for atmospheric conditions, a bullet's drop is easily calculated.  We don't need to do math, we'll just use one of the many ballistics programs that are available—if you are interested, try the free online program I put together at www.gseven.com.  The sample trajectory in Figure 1 is typical for a 7mm Remington Magnum shooting a 168 grain VLD bullet at 3050 fps muzzle velocity. 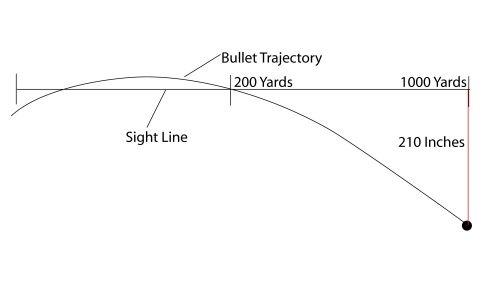 Figure 1.  Sample Trajectory showing the bullet path crossing the line of sight.Because gravity causes the bullet to drop, the longer a bullet takes to reach its target, the more time gravity will have to pull it towards the earth.  This means that velocity is the big player effecting how much a bullet will drop.  But this is where atmospheric affects come into play.  A bullet traveling through the air will lose velocity, and the bullet's shape effects how fast it will slow down.  Just imagine a long slender VLD bullet compared to a flat nosed semi wad cutter.  The pistol bullet will slow down much faster, see Figure 2. 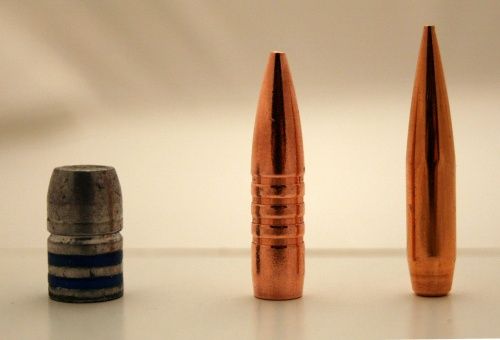 Figure 2.  Flat nosed pistol bullet on the left, .308 Cal 168 grain Barnes TSX center, VLD shaped 7mm 168 grain far right.But it doesn't take a huge difference in bullet shape to have a big effect when we are comparing velocities over 1000 yards.  The 30 caliber 165 grain Barnes TSX would have to be fired at 4100 fps muzzle velocity to maintain 2000 fps velocity at 1000 yards.  While the 7mm 168 grain VLD would only need 3100 fps at the muzzle to match that 2000 fps velocity at 1000 yards.  The Barnes bullet loses velocity at twice the rate of the VLD!  This difference in bullet shape can be quantified, and the comparison simplified to one number—the Ballistic Coefficient, or BC.  The numbers for hunting bullet's usually range from 0.200 to 0.800 with most falling in the 0.400 range.  The higher the number, the better down range velocity retention.

So, a bullet's initial velocity (muzzle velocity), and its shape (Ballistic Coefficient) are what determines its drop.  But gravity drop is only the first of many effects that we need to compensate for, in order to shoot precisely at long range.  The second, and in my opinion, the most difficult to compensate for is wind deflection.  Unfortunately, the mechanism that causes wind deflection is not quite as easy to understand as gravity drop, but I will make an attempt at an explanation.

Wind deflection, or drift as we usually refer to it, does not occur from wind blowing on the side of the bullet.  It is caused by the bullet aligning itself to the relative wind vector.  Basically, like a wind vane on a roof or windmill, the bullet will align itself with the prevalent wind.  The reason that the bullet deflects, is because its initial flight path or direction is different from the wind vector and resulting bullet attitude.  The illustration in Figure 3 was reproduced from Harold Vaughn's excellent book Rifle Accuracy Facts, and shows how a bullet reacts, and the drag forces that cause wind deflection. 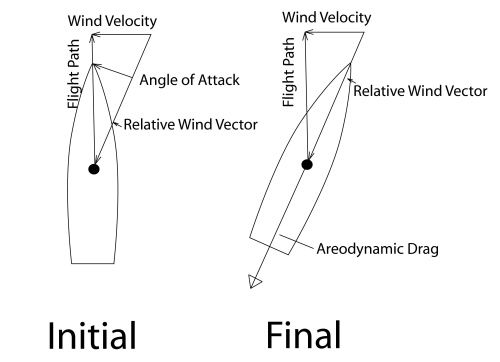 Figure 3.  Wind Drift diagram showing how the forces act on a bullet. The amount of wind deflection is basically determined by how large  the drag forces are and how long those forces act on the bullet.  So, the crosswind velocity and the bullet's time of flight will determine how much it is deflected in the wind.  The time of flight is dependent on shape (BC) and initial muzzle  velocity.  Let's compare the amount of wind deflection for two different bullet's launched at 3000 fps MV.  A bullet with a BC of 0.400 will drift over 40 inches at 700 yards in a 10 mile per hour crosswind.  Increasing the BC to 0.700 the drift is only half, at 20 inches!  Decreasing wind deflection is a very important part of precise long range shooting.  Mainly, because of our inability to directly quantify wind speed and direction as we can with distance when using a rangefinder.

As we examine the drop and deflection of a bullet it becomes apparent that BC and velocity are very important parameters for shooting at long range.  Now, if we could just shoot a bullet with a BC of 0.800 at a muzzle velocity of 4000 fps, we would have an awesome long range hunting round!  Unfortunately, as hunters we have other limitations that force us to settle for equipment with lower BC values and muzzle velocities.

One of those limitations is shooting system portability and that goes hand in hand with recoil and muzzle blast.  A hunting firearm can only be so heavy, and a smart shooter will only subject himself to a limited amount of recoil.  The other major factor is bullet availability.  The heavy-for-caliber VLD bullet's are the only readily available high BC bullet's that have been documented to ethically perform at long ranges on game animals, and the BC range on those bullet's ranges from 0.550 to 0.685.  The highest being the 180 grain 7mm.  This bullet with a muzzle velocity of 3000 fps in a 10 lb shooting system, with proper stock design is about a maximum level of recoil a long range hunter should deal with.  In the past too much attention was placed on increasing MV, but modern long range shooters realize that increasing the BC increases performance without increasing recoil.

Using this as a reference, let's examine several other factors that can effect our shot placement.  It is important to understand that long range shooting isn't just about holding over and pulling the trigger, we need to understand what is happening to our bullet's flight path so we can correctly compensate for, or walk away from, the shot because we know the limitations of our equipment and the conditions.

The first is simple to measure and compensate for.  Because of the nature of the bullet's shape and its performance through the air, changing Air Densities can have a large effect at long range.  Most simple ballistic calculators take air density into account, and change the manufacturer's standard sea level Ballistic Coefficient to match the environmental conditions.  These are Altitude (basically, Pressure), and Air Temperature.  Humidity plays an almost negligible role.

Let's look at the difference in drop and deflection for our reference at 1000 yards from a 200 yard zero for two cases:  1000 ft 50 degrees ,and 8000 ft and 20 degrees.  There would be 226 inches drop at 1000 ft elevation compared to 207 inches at 8000 ft;  and 52 inches deflection versus 40.  Those are definitely numbers that need to be accounted for, but most sophisticated methods for long range shooting handle these changes easily. 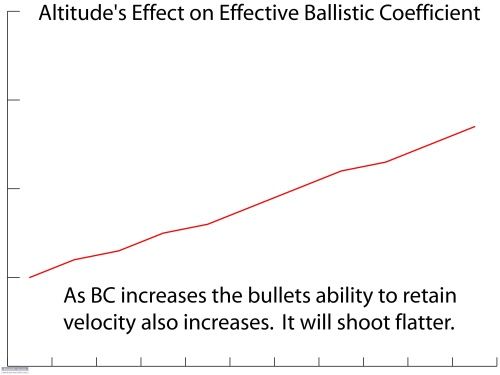 Altitude vs Effective BC

The second is errors in ranging and wind doping.  A good laser rangefinder is a tool, and if it isn't used properly it won't yield good results.  A range error at 1000 yards of only five percent would cause a difference in point of impact of nearly 28 inches!  Most rangefinders can have errors of at lease two percent at 1000 yards, even if you do everything else correctly—keep in mind that it is very easy to range an object just behind or in front of your target.

The same goes for doping wind for direction and speed.  You might be able to measure with a data meter the speed and direction at your location, but the wind is very likely doing something entirely different at mid-range, or at the target.  Eliminating the effect of wind by using high BC's and proper compensation techniques is the only solution.  I am alarmed at the number of proponents of long range shooting technology that simply ignore the effect of wind, and have no provision to compensate in their equipment.  Guessing and sighter shots have no place in todays hunting ethic.

Magnus spin drift will cause a bullet to drift right for a right hand twist barrel, and the amount is proportional to the square of the time of flight.  Again, BC and velocity is important.  We've measured the reference system to be on the order of eight inches at 1000 yards, but because of its exponential dependency on time of flight the 1500 yard drift could be as much as five feet!

Corriolis effects from the earths rotation also needs to be compensated for.  We will ignore any left/right effect, and focus on the vertical errors.  At 1000 yards the rotation of the earth is basically moving your target down 2.6 inches per second if you are pointing east, and up if you are pointing west.  Again we see how important a short time of flight is to minimize these effects.  Our reference system will take 1.3 seconds to reach 1000 yards.  That adds up to a difference of point of impact between shooting east and west of nearly seven inches.  We can minimize the effects from Magnus and Corriolis for sub 1000 yard shooting by zeroing at a longer range like 800 yards—while pointing north or south.  Then our errors are within the accuracy potential of our hunting rounds.  If you would like more information about any of these topics in an easy to understand format, try Robert Rinker's Understanding Firearm Ballistics.

Incline shooting, and cant are two more factors that need to be controlled.  A 20 degree incline at 1000 yards is worth 15 inches and is a realistic shooting situation.  Canting your rifle scope (tipping it left or right) can also cause significant left/right error.  If you cant your rifle the same every time, you won't have a problem, but if you change your cant by tipping your scope just five degrees to the right, your point of impact in the standard system would be 16 inches right!  Use a small level, and look closely at new rangefinders that incorporate incline shooting compensation. 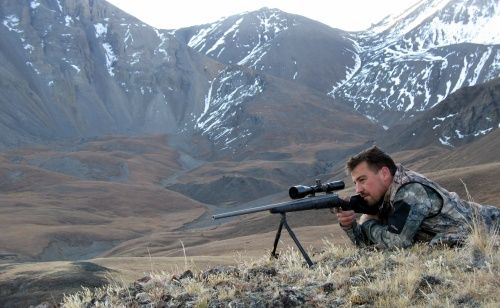 Shooting Conditions in the Mountains can be hard to determine.  Practicing in these conditions can yeild valuable experience.I'm always learning about how to become a better shooter, and I still make mistakes.  On that same goat hunt, I missed a longer shot because I didn't read my terrain perfectly, and an updraft caused me to shoot right over his back.  Up and down winds can be tough to deal with because of difficulty in reading mirage, or the terrain can be hidden.  It just takes experience, and a willingness to shoot often and learn something every time you pull the trigger.The more you shoot and practice, the more you will realize how difficult precision shooting at longer ranges can become.  Shots at game at 800 yards are extreme and should only be attempted by shooters that are using the right equipment, and have the coaching and preparation to positively make the shot.  In our next article we will look at how to calculate and compensate for long range shooting, and the equipment and programs that will do it.