History of the revic PMR
To share the development history of the Revic PMR smart rifle scope, I really need to go back to the beginning...
27 November, 2019 by

To share the development history of the Revic PMR smart rifle scope, I really need to go back to the beginning. In 2006, I had only recently graduated college with a mechanical engineering degree. By developing a construction business during and after college I was able to save enough to found Gunwerks in a small, 3,000 square foot shop attached to my house. My wife was nervous, but I knew that I could bring something special to the hunting and shooting industry. The idea behind Gunwerks was to basically just copy an idea from 150 years ago: the complete shooting system. At that time, Europe’s influence extended around the globe, and the enterprising gentleman would embark on expeditions for work or leisure and the guns they would take with them included the firearm, regulated sights, ammunition and all the gear required for extended safaris. 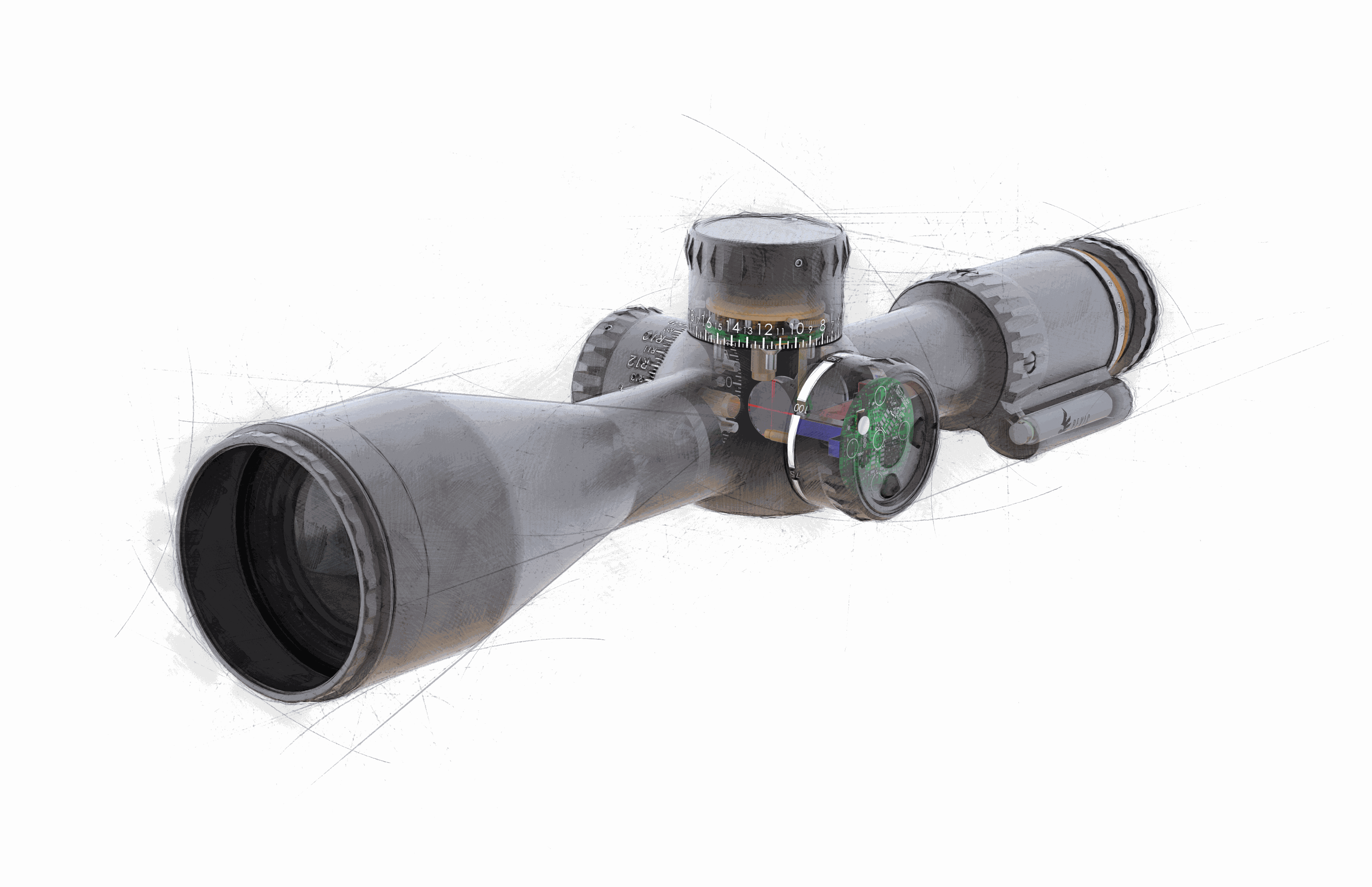 The idea of controlling and providing all the aspects of the shooting system to a customer ready to use “out of the box” was the founding principle of Gunwerks. Within months I realized that optics and ballistic systems would have to become our defining differentiator.

In the beginning, the state of the art in long range hunting was a two inch by four inch chart taped to the side of a rifle buttstock. With the introduction of affordable laser rangefinders in the late 90s, these charts and the soon-to-follow holdover reticles offered a few hundred extra yards in effective shooting range. I tried this method, and realized that it was pretty crude. By taking that same chart and wrapping it around a tall scope elevation turret, the adjustment time was much faster, and holding with the center crosshair helped me hit better — when the wind wasn’t blowing!

I developed and patented a system of marking the elevation turret with a wind holdover mark. When used with a simple reticle featuring 1 MOA spacing, a novice shooter armed with a rangefinder and a wind meter could quickly and effectively apply a ballistic calculation to nearly a half mile.

The big scope companies were scared of the individual customization of a ballistic turret, so the Gunwerks team developed our first ballistic program and turret laser marking system. We also started an optics brand working with a premier OEM manufacturer in Japan. By early 2007, we were ready to start delivering our first complete shooting systems. These systems were complete with rifle, scope, ammo, and a laser marked ballistic turret with data generated from extensive test firing of each individual system.

Our customers were ecstatic! We were shipping turnkey systems that saved our customers tons of time and frustration, allowing them to focus on more important things (like wind reading). We grew really fast!

THE SYSTEM WASN’T COMPLETE YET

The Ballistic Turret is calibrated in yards so it’s easy and fast to use. The problem is that the turret “chart” has to be made to match a fixed set of shooting conditions. For example, the chart would be set for a specific elevation and temperature, like 5,000 feet and 50 degrees. Also, we would make the turrets for a 0 degree incline. The weakness with a Ballistic Turret is that with longer shots, variations in air density and incline would cause misses.

A vital tool for long range shooting and hunting was missing. We needed a range finder. And not just a simple range finder that would tell us how far; we needed a rangefinder that would help us make better shots at greater distances. It needed to correct the range for the current set of shooting conditions. We called it a shoot to range. And in 2011 we introduced the first ballistic rangefinder, the G7 BR2. Now our customers could buy a complete shooting system!

NO OTHER COMPANY WAS ABLE TO COMPETE

With extensive field trials we had created the fastest, most accurate shooting system on the planet. Every custom gun maker has followed our footsteps, or fallen by the wayside. Precision shooting was here to stay, and serious hunters and shooters experienced a paradigm shift in expectations of rifle performance.

I’ve personally used variations of this system for over a decade. If I count culling operations in Africa, and spotting/observer role, I’ve been involved in several hundred hunting engagements. If we top that with shooter interactions at our Long Range University training courses, my experience hunting and training hunters has given me a very diverse perspective on what works and what is needed for hunting and shooting success. Overlayed with an engineering education, that perspective drives the development of truly functional product solutions to shooting problems.

The special project that became the Revic PMR 428 started in 2012, right after the launch of the G7 BR2. I envisioned a product that was more integrated, more responsive, and put more control in the hands of the shooter. We realized the many weaknesses of the laser marked ballistic turret. Just wear out a barrel once, and watch the velocity — and in some cases the bullet BC — change over the barrel’s useful life. Or change a bullet or load, or even the lot of brass, and see how it affects your ballistic trajectory.

The Revic PMR was conceived to solve all of those issues by providing the customer a “virtual” ballistic turret. With all the ballistic data programmed into the scope, and with a full suite of sensors onboard, the ballistic solution could be calculated in real time based on easily changeable ballistic parameters specific to your rifle. Despite the complexity, the shooter still only has to dial the turret until the range to target is displayed. It sounded so simple in the beginning! If we dive into the details of the product development story, we realize that it was not simple by any means. I’ll outline the major areas of development.

FROM IDEA TO REALITY

First, we knew that designing and assembling a scope from scratch, while doable, would create consumer costs that were too high. We needed to follow the same path that the big boys like Sig, Vortex, and Nightforce did, using a specialist Original Equipment Manufacturer to assemble a high quality lower cost product. That was easy, we just went to the same company we worked with back in 2006. They make the majority of the world’s high end rifle scopes. They were excited to take on a new project that didn’t follow the "me too" pattern the industry had slipped into. 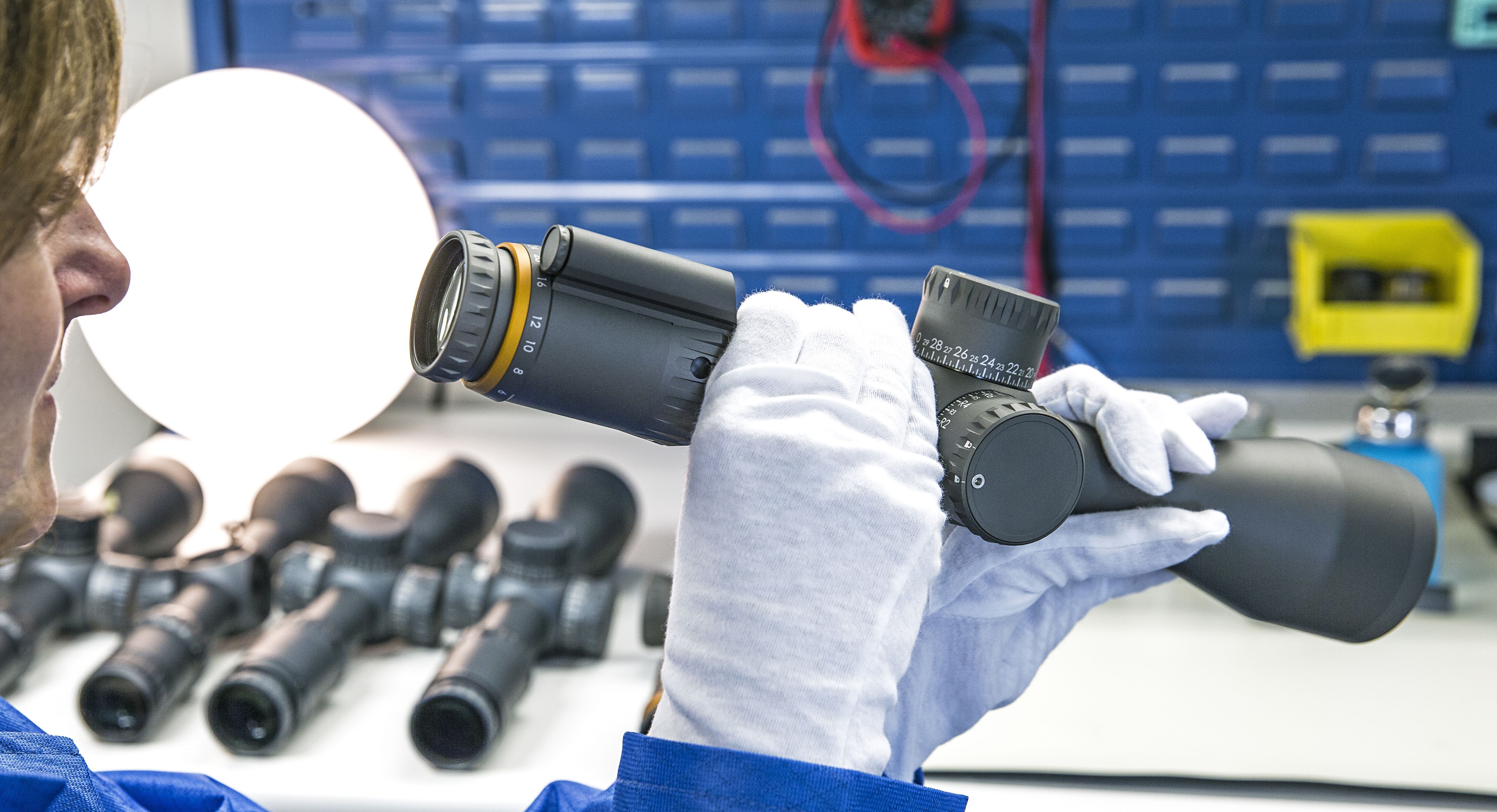 The second problem revolved around the mechanical and electrical design of the PMR’s features. We needed an onboard computer, we needed a micro display, and we needed a position encoder to read the adjustment of the elevation turret. And we needed power.

We outlined the initial product design early in 2013, but with no internal design team, we used outside contractors to generate early prototypes. It took us a whole year to prototype the concept and generate solutions for the major areas of design. The first complete prototype was completed by January of 2014. Another year slipped away!

None of the solutions were robust enough. The optical encoder solution was too sensitive and expensive. We couldn’t make it work. Tracking the turret position through multiple revolutions was absolutely necessary and it had to track position even if the power was off, the selected solution couldn’t do it. The display was too restrictive. There just weren’t enough options out there for micro displays. The seven segment prototype just would not allow enough data to be displayed. I hated the forward mounted battery box. In short, we scrapped nearly everything, including our outside contractors!

In 2015, I built an in-house design team. Actually, we were able to start an electrical systems engineering group in Austin Texas. We even attracted some of the original Tracking Point design team. That year we started from scratch. We created a new computer board and ballistic algorithm. We designed a new encoder system for the turret, and we waited patiently for a small semiconductor startup to create the first micro OLED display. Things were looking up!

After several iterations, and the whole user interface design process, we had a functioning product that we could begin testing. We did. For over a year. Over and over again. The amount of bugs and details involved are enough to bore anyone to death. Suffice it to say that our inhouse team was awesome! We announced the new product officially at the NRA show in 2017.

So where does this story take us? I think the bottom line is how the PMR scope product solves shooter problems. In the traditional shooter/spotter team, the spotter drives the flow of information. The shooter  applies the correction and breaks the shot on target. This is a tried and true system that works the majority of the time. For my favorite customer (the hunter) many times the scenario breaks down when big trophies and fading windows come into play. Most people lack one of the key fundamentals for successful shooting: time behind a gun. It’s just so hard to get away from daily life. So to increase the chances of success in the margins, we apply technology. The PMR system with the Virtual Ballistic Turret and heads up display shifts the control of the information back to the shooter. The shooter controls the ballistic solution, even the wind vector inputs. Now the spotter needs only to provide a range to the target. 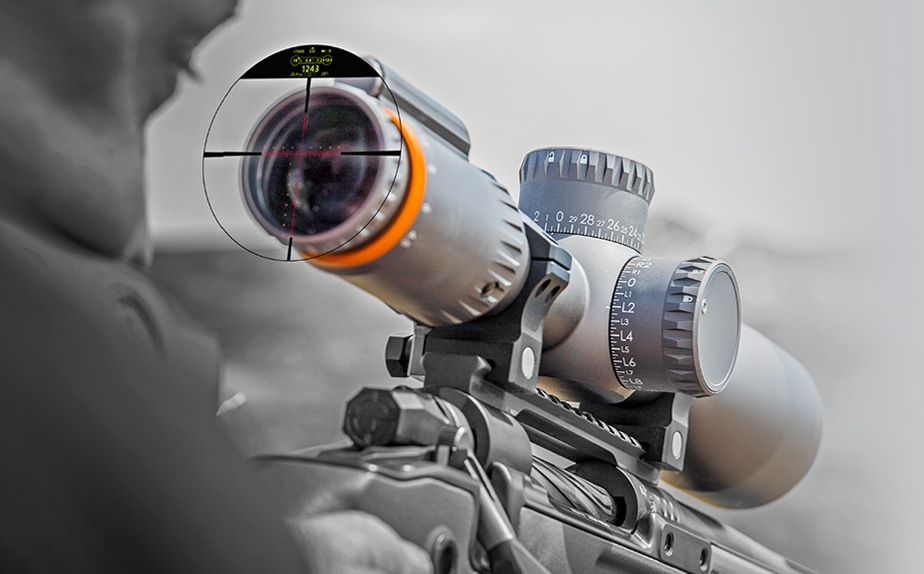 With this platform, the configuration and customization for specific shooting niches is endless! The product family in the works will communicate with the PMR, and enhance it’s function for niche shooters. User experience focused technology that streamlines the use of ready information will dominate the next developments in shooting gear. The PMR lays the groundwork.

For now, using the PMR is a completely new approach. Many shooters don’t realize how much the advantage really helps, until it’s too late. Unless you have the right job in the industry, it’s just too hard and too expensive to get enough shooting experience. I’ve seen the failures (I have a list of my own) and I know that this evolution of the shooting system will also eventually become mainstream. The advantages are just too great!