Bullet Drop Compensators (BDC) are simply target style elevation turrets on a rifle scope which are calibrated in yards rather that the standard MOA (or ¼ MOA clicks). By simply turning the BDC turret to display the proper yards to target, rapid adjustments for bullet drop at varying distances can be made. Because they mark the scope adjustment for zeroing at different ranges, BDC turrets are cartridge specific-in fact, how specific determines how accurate the BDC turret can be.

Unfortunately for the consumer, all BDC turrets are not created equally, some are so crudely constructed that they require tedious hours at the range determining the zero adjustments for all yardages.  This creates a turret for a specific altitude, but leaves no provision for creating a turret for the altitude you may be hunting at. While others are naively created with just a bullets manufactures estimated, G1 Drag model based, Ballistic Coefficient (BC) and a muzzle velocity (sometimes these are even estimated velocities). Please refer the other articles for a more detailed discussion of BC's, but let me summarize that for most Bullet/Velocity combinations, this method produces BDC turrets accurate for distances of 400-600 yds. Our method of creating BDC turrets starts where others have left off. First, an estimated bullet path, or trajectory, is created by our software through our web interface using the manufacture's BC and an average velocity. A data sheet is printed and taken to a shooting range for completion. Correction factors are obtained by adjusting the elevation turret the amounts specified on the data sheet for the particular target distances and shooting three targets at close medium and long range. It is recommended that the long range target is at least 70% of your maximum expected distance to shoot. For example, we will shoot at 200, 400, and 700 yards to collect information for a 1000 yard BDC turret. While shooting, an average muzzle velocity is recorded with a chronograph Measurements for altitude and temperature are also taken. The data is shot in 5-10 shot groups, the statistical average of the dispersion from zero is recorded. In other words, the amount the group center is low or high from aim point on the target is measured. Please see or article on evaluating target groups. The information from the completed data sheet is entered into our form on the internet web site. Our proprietary software generates a drop chart which includes calculators to create a modified bullet drag model and a true ballistic profile. This TBP can be used to create precise BDC's for all air density (altitude and temperature) situations, from coastal bears at sea level to Marco Polo sheep at 15,000 ft.--try that with any other compensator and you will be disappointed. 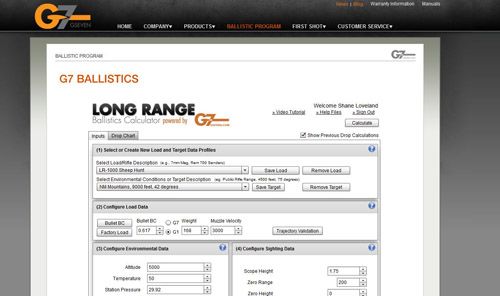 Use the BC calculator at www.gseven.com/ballistic-program to get an accurate drop chartWe are making compensators for serious hunters, and while we may not encourage taking game at 1000 yards, practicing on targets and inanimate objects at long range will allow serious shooters to ethically push the boundaries of long range hunting. At ranges beyond 1000 yards, the effects of several ballistic phenomena begin to show effects on bullet placement.  The G7 Ballistic Turrets are equipped with an adjustable zero index stop and 20 MOA adjustment in one revolution of the elevation turret. This allows us to create BDC's for yardages from 800-1100 yards while maintaining single revolution operation.  The turret also features an additional revolution of drop compensation to use in conjuction with the true ballistic correction from the G7 BR2 ballistic rangefinder--you can dial right on out to 1400 yards! Finally an MOA scale is included for convenience.