For years, I remember listening to my dad, grandad, and anyone else we hunted with, tell stories about chasing the elusive 30” wide buck. It was, and still is the pinnacle for many western mule deer hunters. Sometime over the last 20+ years, the Boone & Crockett scoring system has taken over in field judging popularity. Love it or hate it, the Boone & Crockett scoring system is the new “benchmark” we use to determine the general size of a trophy. And, for me, a 200” B&C mule deer buck is the equivalent of a 30” wide buck my dad and grandad were always after - likely even more difficult to find and kill.

I’ve been hunting mule deer for nearly 25 years. In that time, I’ve probably laid eyes on less than five mule deer bucks that would gross score over 200”. That creates a problem. A 200” buck problem. Extremely low quantity and high demand. In the last 5 years or so, finding a 200” buck has become my focus. Each time I’ve “settled” and pulled the trigger on a smaller buck, I secretly cringed.

With the excitement building around our new Revic EXO open sight, a solid Colorado muzzleloader tag was high on my priority list. I knew what the sight could do at the range, but I wanted to put it to the test in a hunting situation. My good buddy Corey and I decided we would target a high country combo elk and deer muzzleloader hunt.

The draw came and went. No luck. Corey and I found ourselves scouring the “leftover” list of tags. We picked up tags in the same unit, he an elk and I a buck tag. Together, we’d have our bases covered. Neither one of us knew the unit or had stepped foot in it. We just knew it was an opportunity hunt in a popular unit that gave out too many tags.

Needless to say this was not the hunt I expected to find the 200” buck of my dreams. We were just looking forward to hunting the backcountry and trying out the EXO sight. To add to my passive perspective on the hunt, I had a Utah moose tag to fill that opened the same day, not to mention my Grandpa Wittwer’s funeral in between the hunts. I would have only 3 full days of hunting at the end of a crowded season.

The first evening of hunting, Corey and I had split up to hunt different basins. As luck would have it, Corey spotted a couple mule deer bucks in a far off basin while I turned up a solid Colorado bull elk pushing cows and bugling. After meeting up at camp later that night and discussing what we each saw, the decision to switch basins was obvious. The next morning, Corey headed toward the big bull. I headed to see if I could relocate the bucks. We knew the bucks he saw weren’t shooters but maybe they would pick up a friend.

Corey has been on many of my hunts. He’s helped pack more of my kills for me than anyone. He’s a one-of-a-kind hunting partner and I definitely “owe” him a couple. After glassing for the first 10 minutes of light, I knew I needed to go help Corey kill that big bull. It was the right thing to do and a stomper bull elk! This was my chance to balance out my debt to Corey. I headed his direction about ½ mile away.

As I approached his glassing point, he saw me coming and frantically waived me over to look in the spotter. The only words he could muster up were “BIG BUCK!” After glancing at the buck I thought to myself, “are you kidding me?!” I had walked over to help Corey kill a bull and he’s got a massive buck spotted for me. “I’ll just have to stop hunting with him,” I thought. It didn’t stop me from making a play on the buck though. This was not the time to balance scorecards between hunting buddies

I made my way about a mile around the basin, until I was just over the ridge where we had last seen the buck. I had every reason to think he would be in the small adjacent drainage. The basin was at 12,000 feet and the buck was still in velvet, hanging out just above the treeline. It was also still very early in the morning. I expected the buck would be on his feet feeding for another hour, at least.

As I crept over the ridge, I purposely came down the small finger ridge where I had seen the buck from across the basin. As I kept glancing to the right, trying to pick up a velvet rack, I pulled my rangefinder and took a range. 150 yards. Perfect. I had been practicing with the new Revic EXO open sight to 400 yards, making 150 a chip shot. I slowed to a snail’s pace, using the small scattered pine as cover as I put more and more of the adjacent drainage in my field of view. Nothing yet.

Just as I was reaching the last bit of tree cover, I picked up movement. One lone buck stepped out from behind a pine tree across the draw. There he was! He was feeding along, just as expected, broadside. To this point, I still hadn’t gotten a look at him long enough to analyze his score. I knew he was a big buck in the spotting scope. Seeing him at 150 yards confirmed he was definitely a shooter buck but didn’t want to assume that magical 200” number. He was big though!

I crawled from the cover of the trees to an old log stump sticking out of the ground about 10” high. It would make a perfect front rest. I loaded a primer and settled the fine crosshairs on the buck’s front shoulder. I had switched the front post in the muzzleloader sight to the fine crosshair instead of the small front dot. For me, the fine crosshair seemed the more precise aiming point. As the buck stopped to look around, I slowly squeezed the trigger. I watched the buck drop in his tracks.

As I approached the buck, I couldn’t believe what I was seeing. With each step he kept growing. I was sure this was my 200” pinnacle! I took time to soak in the moment. Just me, the buck and the mountains he called home. I then took some quick photos, punched my tag and waited for Corey to make his way over from across the basin. “Put it on my tab,” I sheepishly thought to myself.

When Corey arrived at the buck, we sat there in disbelief. He mentioned how quickly the morning had escalated. I was glad he was there to share the moment. I was glad I had the equipment built to do the job. Growing up in Nevada, another state that requires open sight muzzleloader equipment, I had seen the uncertainty that came with the traditional muzzleloader sights. We both skirted around what we thought the buck scored. No one wants to be the guy who throws a number out first. Jokingly, we both agreed he was over 180”, to be safe! I was secretly certain he would break 200” gross.

After the Backcountry Logistics A-team pack llamas helped with the pack out, we were able to put a tape on the buck. Unofficial score came in at 199” ⅛”. I couldn’t believe it! My first reaction was, “you’ve got to be kidding me!” But as it sunk in, I was surprisingly happy. I now had 199” problems and something to keep hunting for. Maybe next year! 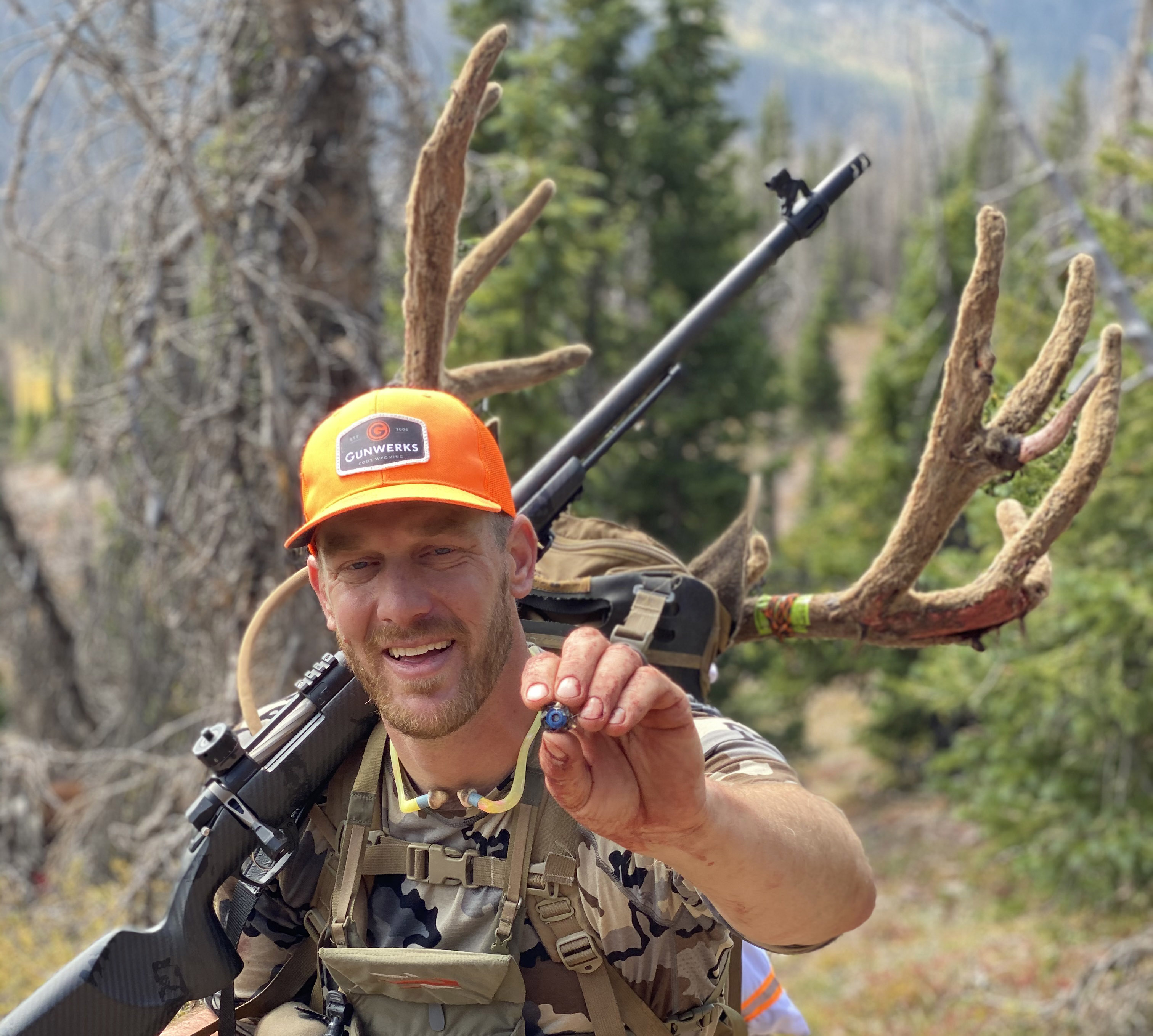 I was using the Gunwerks .45 cal muzzleloader with carbon wrapped barrel. I was shooting the new .45 caliber 280 grain ELR bullet from Powerbelt, around 2,315 fps with 95 grains of Blackhorn 209. I took one shot. The buck did not take another step and dropped in his tracks! One other change I made that I think paid off was removing the rear aperture. It opened up the rear peep to the perfect dimension for just the slightest amount of light ring around my front sight aperture. I was able to pull the bullet from the buck, which lodged in his offside hide after passing through his vitals. It retained almost exactly 50% of its weight. 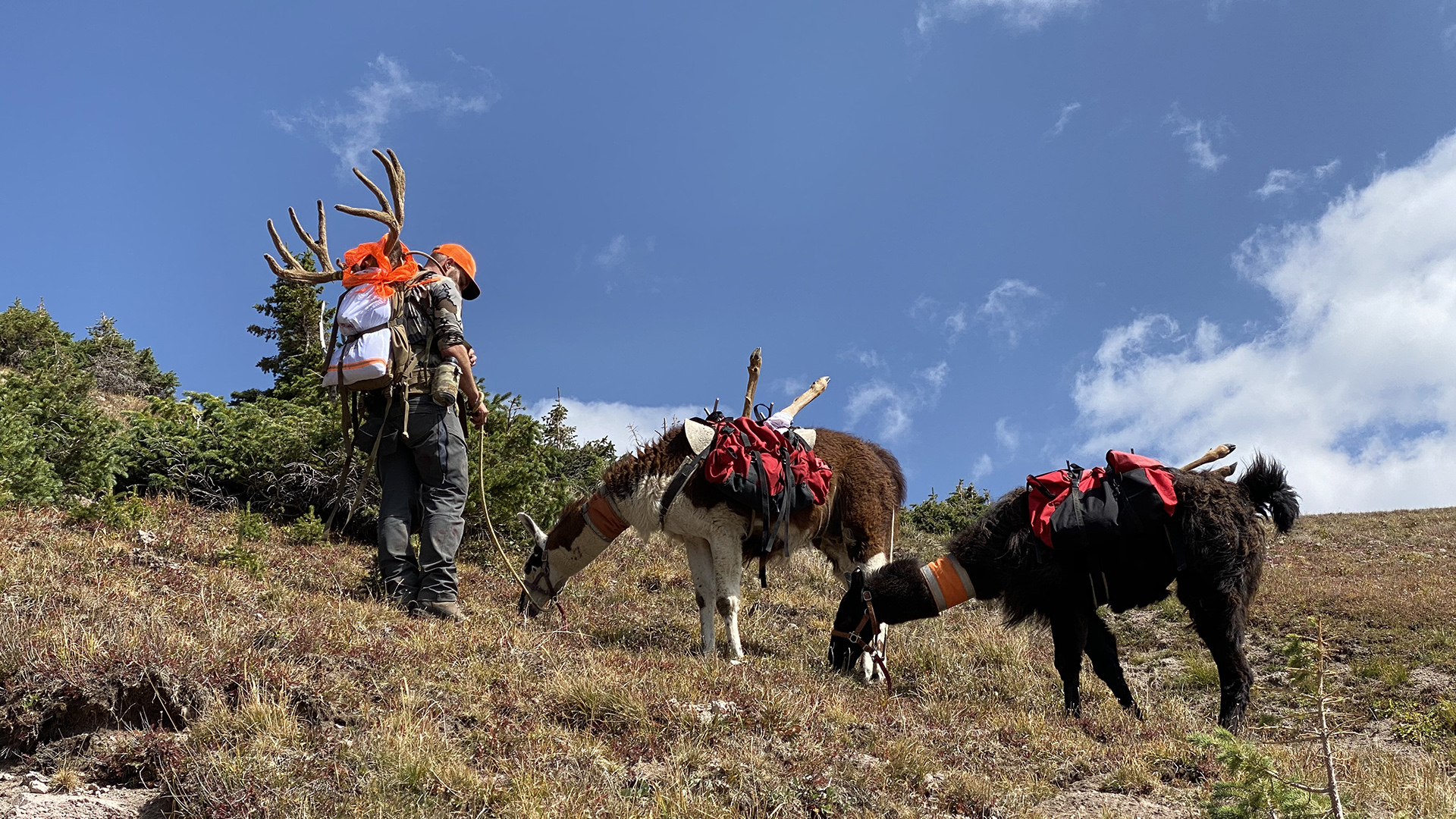